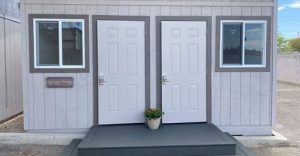 According to the National Coalition Against Domestic Violence, up to 40 percent of domestic violence victims in the United States report that they have stayed in abusive situations rather than leave their pets behind, and 71 percent of pet owners seeking shelter report that their abuser had threatened, injured or killed a family pet.

“Knowing we were not able to serve that subset of victims who aren’t able to leave their pets was the catalyst for all of this,” Christy Shannon, SafeNest’s chief operating officer, told the Review-Journal.